The assumption by regulators around the world that it is safe to use pesticides at industrial scales across landscapes is false, according to a chief scientific adviser to the UK government.

The lack of any limit on the total amount of pesticides used and the virtual absence of monitoring of their effects in the environment means it can take years for the impacts to become apparent, say Prof Ian Boyd and his colleague Alice Milner in a new article.

The damning assessment of pesticide regulations that are meant to protect the global environment follows a growing number of highly critical reports including research showing farmers could slash their pesticide use without losses and a UN report that denounced the “myth” that pesticides are necessary to feed the world.

“The current assumption underlying pesticide regulation – that chemicals that pass a battery of tests in the laboratory or in field trials are environmentally benign when they are used at industrial scales – is false,” state the scientists in their article published in the journal Science. Boyd is chief scientific adviser to the UK’s Department of Environment, Food and Rural Affairs, where Milner also works on secondment, but their criticism reflects their own views.

“The effects of dosing whole landscapes with chemicals have been largely ignored by regulatory systems,” the scientists said. “This can and should be changed.” They contrast this situation with pharmaceuticals, for which there is a system of rigorous global monitoring after a drug is approved in case adverse effects emerge.

“Vigilance on the scale that is required for medicines does not exist to assess the effects of pesticides in the environment,” they said. They cite the UK as an example of one of the most developed regulatory systems: “Yet it has no systematic monitoring of pesticide residues in the environment. There is no consideration of safe pesticide limits at landscape scales.”

The scientists’ article also criticises the widespread use of pesticides as preventive treatments, rather than being used sparingly and only when needed. 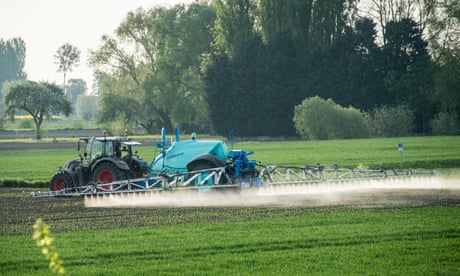 Farms could slash pesticide use without losses, research reveals

Milner told the Guardian: “We want to start a discussion about how we can introduce a global monitoring programme for pesticides, similar to pharmaceuticals. It can take years to fully understand the environmental impact.”

“Any chemical you put into the environment has the potential to be widely distributed,” she said. “We’ve known this for decades, particularly through the early work in the 1960s – the Silent Spring, DDT and so on – and you can find chemicals in places that have not been treated because of the connectivity of ecosystems. There are often quite unexpected effects [and] you often don’t see them until the pesticide is used at more industrial scales.”

Matt Shardlow of the conservation group Buglife said: “Pesticides have got big on society – the thin veil of science around the approvals process has been exposed and the marketing strategies are stronger than the products they tout.

“If you think the biggest governments in the world are wrapped around the pesticide industry’s fingers, that’s nothing compared to the 35% of countries that have no regulation at all. It looks as if only an international convention can get pesticides back into a box that helps rather than harms us. It can’t come soon enough.”

The UK government has repeatedly opposed increased European restrictions on widely used insecticides that are linked to serious harm in bees, but a partial ban was backed by other nations and introduced in 2013.

However, the environment secretary, Michael Gove, said in July that changes to pesticide regulation were being considered: “Certainly, it is the case that anyone who has seen the [recent] scientific evidence must inevitably contemplate the need for further restrictions on their use.” After Brexit, he said: “Informed by rigorous scientific analysis, we can develop global gold-standard policies on pesticides and chemicals.”

Keith Tyrell, at Pesticide Action Network, said the current pesticide management system was not fit for purpose: “We don’t know how a pesticide will really impact the environment until it is too late. It can take years before enough scientific evidence is collected to persuade regulators to take action, and they will be fought every step of the way by pesticide manufacturers who make millions from these products.” 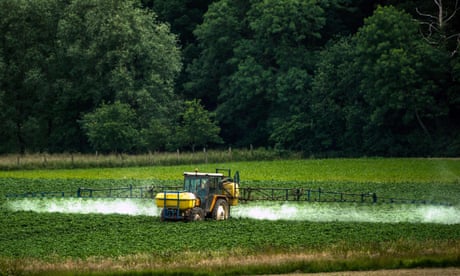 The UN report in March was severely critical of the global corporations that manufacture pesticides, accusing them of the “systematic denial of harms”, “aggressive, unethical marketing tactics” and heavy lobbying of governments which has “obstructed reforms and paralysed global pesticide restrictions”.

Sarah Mukherjee, chief executive of an industry group called the Crop Protection Association, said: “As [Boyd and Milner] themselves acknowledge, crop-protection products are a fundamental component of a sustainable, productive agricultural sector which seek to strike the right balance between protecting the environment and providing a reliable supply of safe, healthy, affordable food.

“Pesticides are amongst the most heavily regulated products in the world. It takes up to 12 years and costs over £200m to bring a new product to market. This process, involving rigorous scrutiny by independent scientific experts, ensures plant protection products are safe before they reach the market.”