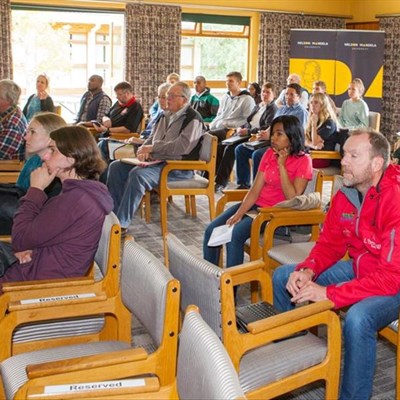 The symposium featured an array of speakers who spoke on the Knysna fire from different professional and scientific perspectives.

GARDEN ROUTE NEWS – The environmental management work group of Garden Route Rebuild is waiting with bated breath to hear if the R37-million they need for emergency environmental rehabilitation in the area will be approved.

According to environmental consultant Paul Bucholz, who works with the Southern Cape Fire Protection Association (SCFPA), this is the first time that an application for environmental emergency disaster funding has been made in South Africa.

This application follows the fires that swept through the area in June. Bucholz was speaking at a symposium titled “Knysna Fire – the Causes, the Fire, the Aftermath and the Future” presented by the Veldfire Management Programme at Nelson Mandela University (NMU), George Campus on 21 September.

NMU is the only tertiary institution in the country that offers a Veldfire Management Programme.

Bucholz said it is imperative that the environmental funding is secured. “It is needed for alien eradication, fuel load reduction, to fight erosion and to rehabilitate the burn scar.” The application is currently on the desk of the Deputy Director General of the National Disaster Management Centre, Dr Mmaphaka Tau, and a decision is expected soon.

The impact of the fires were filmed using drones and Bucholz showed where high altitude teams have placed very expensive anti erosion fibre sausages and blankets under very dangerous conditions on slopes that had burnt completely bare.

Manager of Planning at Sanparks and chairman of SCFPA, Len du Plessis, called the fires, the evacuation, the use of social media and the subsequent rebuild and rehabilitation efforts “unprecedented”.

Du Plessis provided details of the environmental impact of the fire and implored government to make the emergency funding available as soon as possible.

“I cannot stress the importance of alien control enough. The regrowth will be massive. It is our biggest challenge and poses the biggest fire risk. It will also destroy our sense of place.”

He said the damage to the soil and landscape had been devastating and that damage to infrastructure caused sewage to run into the Knysna estuary.

Du Plessis expressed the hope that the habitat of the endangered Brenton Blue Butterfly, which is found only in this area, has not been eradicated altogether.

MTO planning officer Willie Brink said the impact of the fire on commercial plantations and the resultant loss of logs will be felt up to 2040.

Malcolm Procter of the Department of Agriculture, Forestry and Fisheries (Daff) in the Free State revealed that the annual length of the fire season has increased by six weeks over the last two decades.

He showcased a model used in the Free State where large areas are demarcated into smaller, manageable, fire risk zones.

He urged town planners and land owners to act responsibly.

Residential areas should not be developed in high risk zones and landlords should control the fuel load and erect fire resistant structures. The National Disaster Management Centre is supporting the symposium and international fire experts will be invited to attend.

Manufacturers of fire related equipment will also be able to showcase their wares. Interested exhibitors and sponsors can contact Pool at tiaan.pool@mandela.ac.za.

‘We bring you the latest Garden Route news’