This tiny  frog was sitting on the balustrade of our cottage this morning, basking in the early morning sun.  Once disturbed it took a long leap into the dense vegetation below, disappearing from sight by blending into the foliage.   These little frogs move fast, jump far  and are not easily spotted. 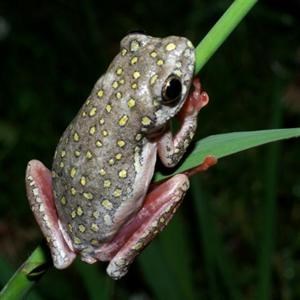 Painted reed frogs  (Hyperolius marmoratus) used to occur only in the eastern parts of South Africa, such as Limpopo, Mpumalanga, the KwaZulu-Natal coastal regions and the Eastern Cape as far as Mossel Bay. In surveys for the South African Frog Atlas Project between 1997 and 2003, the first painted reed frogs were also, however, observed in the western parts of the Western Cape.

Since then, all three colour forms of this frog, each with its own body pattern, have been observed as far as the Cape, it is speculated that increasing road transport could be a contributing factor to the frogs’ migration. Painted reed frogs live and breed near pans and dams in subtropical environments but they do sometimes find their way into houses and even into vehicles. Added to this, they are also good tree climbers. It may well be their tendency to climb into nursery plants and vehicles that has led to their increasing southward migration.

At approximately 3cm, these reed frogs are only about as long as your upper thumb joint. It therefore takes a practised eye to locate them. During mating time in the summer months, however, painted reed-frog males are very noisy and it becomes considerably easier for frog spottrs, to track them down in vleis and dams.

This species does not croak, as such. The painted reed frog’s definitive whistle sounds almost like that of a finch. Painted reed frogs are like little Picasso canvases, like a fine piece of art – their colours and patterns vary tremendously and some have spots while others have stripes and others still are marbled. Their feet are usually a red/pink colour. Adults can’t be mistaken for any other species in the Knysna area. Sub-adults, however, often confuse people, as they lack the bright colours. Juveniles are a pale brown colour, with faint banded markings on their sides.

Are they poisonous? No. Some people may believe that they are, due to their bright colours, but they aren’t.

Painted Reed Frogs emit a short, piercing, high-pitched, whistling sound. If you’re standing by a pond where there are a few dozen of them calling, your ears may start ringing and you may get a mild headache. They’re incredibly loud, but it’s still a nice call. I’d rather listen to them than not hear any frogs at all.

Where do they live? Around any body of still water – they’re not fussy. Whether it’s a dam, garden pond or wetland. Where there’s fresh, non-polluted water, they’ll be there. In a way, it’s a pity that they’re so common. If you go looking for frogs, you’ll see plenty of these so you soon forget to admire and appreciate these stunning little frogs.