“The oldest living things in the world are a record and celebration of our past, a call to action in the present and a barometer of our future. They’ve survived for millennia in desert, in the permafrost, at the tops of mountains and at the bottom of the ocean. They’ve withstood untold natural perils and human encroachments, but now some of them are in jeopardy, and they can’t just get up and get out of the way. It’s my hope that, by going to find these organisms, that I can help draw attention to their remarkable resilience and help play a part in insuring their continued longevity into the foreseeable future.”

Join Rachel Sussman on her journeys around the world, take note of the Boabab, Welwitschia and the ‘underground’ forests of South Africa. https://flip.it/sPSOAR

Tucked away and protected, the underground forests in South Africa are estimated to be more than 13,000 years old. 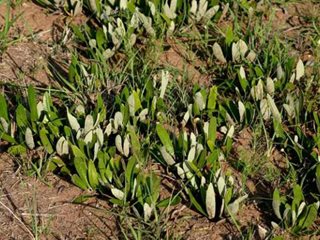 In South Africa’s coastal grasslands, to explore a forest is to walk along its canopy-indeed, it’s the only way to observe an extraordinary group of so-called underground trees, where only the uppermost leaves and branches are visible. The rest of the tree is submerged below the deep sandy soil, creating a clonal network of underground “forests.” By all appearances, the forests are merely low shrubs, which presents the philosophical riddle: if a tree falls and no one can see the forest, what of the forest? In these underground forests, however, the trees don’t fall-that is their adaptive brilliance. Tucked away and protected from so many environmental threats, they underground forests are considered all but immortal, with estimated ages of 13,000 years or more.

Not uncommon in the African savanna, but scarcely found elsewhere in the world, the peculiar plants are known as pyrogenic geoxylic suffrutices (or, suffrutex), explains Professor Braam van Wyk, plant taxonomist from the University of Pretoria. “[These] woody plants can be compared to underground trees, and all that you see are green twigs, which can be compared with a canopy of the tree. A whole area may be one plant, and it’s the canopy that just sticks out, the tips of the branches above ground.” Having evolved in a dry landscape where plants are devoured by grazing animals and bushfire, these underground trees have a significant advantage. By shifting the majority of its trunk below ground, a suffrutex tree is mostly impervious to above-ground survival pressures. “These tips may burn down every year, but the rest of the tree stays untouched underground,” says van Wyk. “They are essentially immortal; nothing can kill them, except for habitat destruction. Grazers cannot kill them, fire cannot kill them, and they are drought resistant.” 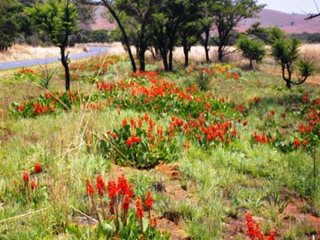 Reproducing underground by branched roots and stems, the perennial canopy emerges only in the spring. The above-ground growth will die after a winter frost or summer fire, meanwhile the underground tree spreads wider and wider. The trees are believed to be the oldest plants in southern Africa, and the only threat to their longevity would be an introduced pathogen-as the underground forests are clonal trees, they lack the genetic diversity to defend the species against new diseases.

Anna Laurent is a writer and producer of educational botanical media. Photographs from her forthcoming field guide to Los Angeles are available for exhibition and purchase at the author’s shop.