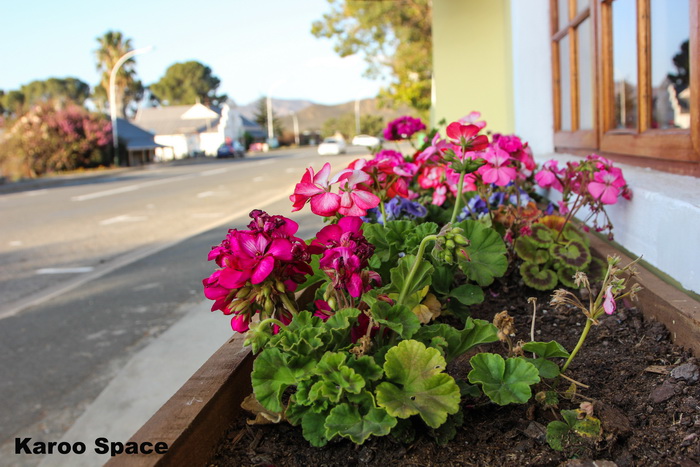 On the last day of September, 1977, my plant-mad maternal grandfather Christoffel Basson spoilt himself with a gift.

It was the first edition of Pelargoniums of Southern Africa. On the title page, my Oupa scrawled an inscription in confident black felt-tip: “A Birthday Present to myself”, adding his unmistakable signature and the date.

I remember being utterly charmed when I inherited the book after his death. My strict old granddad writing such a goofy message to himself in a book – who does that kind of thing? I put it away in a bookcase with my other plant books and it slowly gathered dust until recently, when Chris and I struck up a conversation with Freda Schoeman, owner of the MooiKaroo country shop outside De Rust. 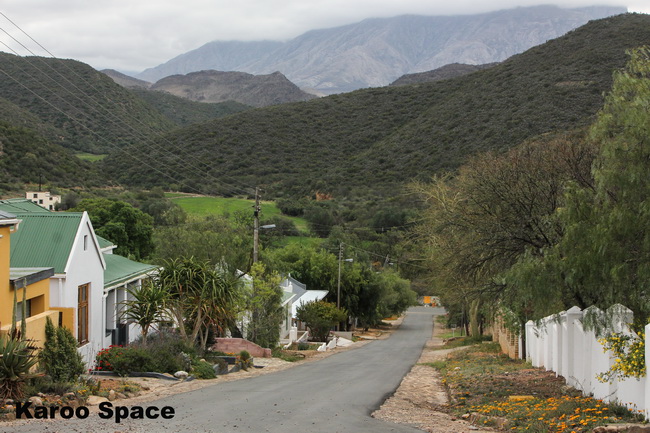 Mad About a Malva

Freda will happily admit that she is “mal oor ‘n malva” – a fool for a pelargonium. She sometimes writes poems about them and they appear on cushions, napkins and other items she and a team of workers make on Doornkloof farm and sell at the shop in town.

The driveway to her farmhouse is lined with these colourful pelargoniums. Among them is a very special ancestor plant.

Freda had been fascinated to find out that the window boxes of Europe are bright with geraniums (as they are also mistakenly called) thanks to a species collected in nearby Meiringspoort in 1689 by a Dutch East India Company gardener called Heinrich Bernhard Oldenland.

It is called Pelargonium zonale. I dusted off my grandfather’s book and consulted the entry on the plant in question. 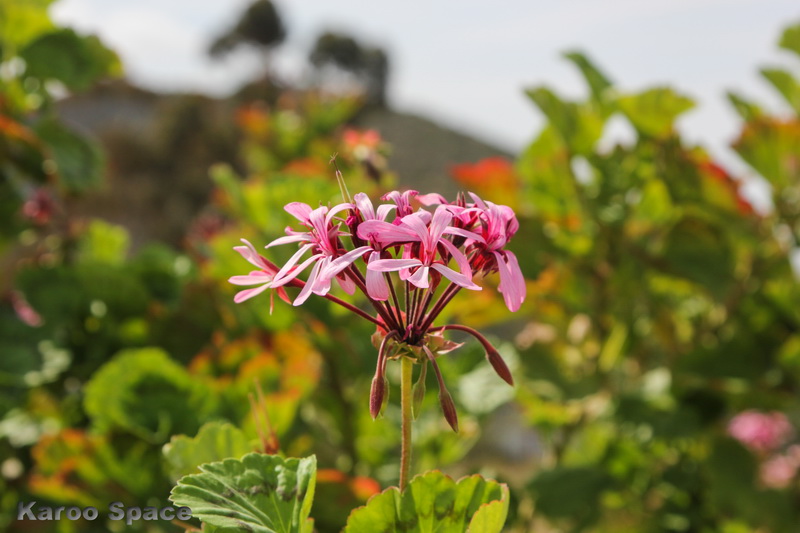 There are over 200 species of pelargoniums in South Africa, and literally hundreds of newer cultivars.

In it, Elaphie Ward-Hillhorst’s beautiful illustration showed an umbel of baby-pink five petalled flowers in a posy on a long stalk above large round green leaves. Every leaf has a distinctive shadow-circle, like the hoofprints from a fairy horse. Author JJ van der Walt notes that the common names are Horse-shoe Pelargonium or Wilde Malva and confirms that this is “a parent of many widely cultivated hybrids”.

Unfortunately Van der Walt does not mention Oldenland’s connection to this plant, although he does describe him as being a pupil of the more famous Dutch botanist Paul Hermann, who in turn is noted as the man who collected a sample of the gorgeous Pelargonium cucullatum on the slopes of Table Mountain in 1672. “By 1690, this species was established in the Royal Botanical Gardens at Kew.”

Van der Walt writes that by 1687, the gardens of Leiden in Holland already had 10 species of South African pelargoniums, mostly thanks to Hermann.

Oldenland (when mentioned at all in botanical records), is named only in the context of this one particular species, Pelargonium zonale. 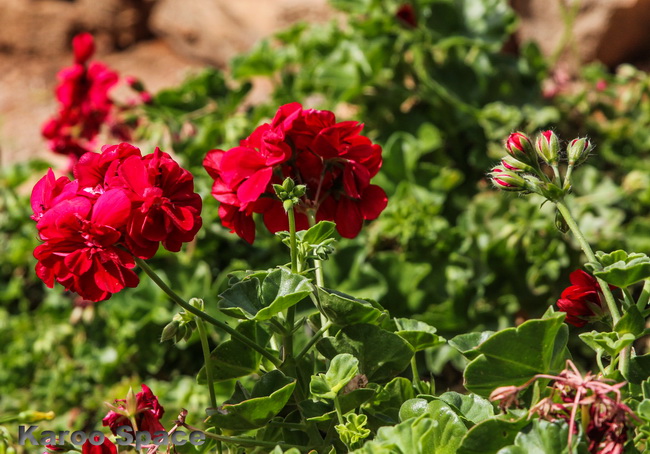 A trailing pelargonium with scarlet flowers and drought-resistant leaves: one of the many varieties growing on Freda Schoeman’s farm, Doornkraal near De Rust.

No matter. It was a malva destined for botanical stardom, possibly thanks to the natural colour variations in its flowers, usually rose-coloured with darker stripes but also pure white and all shades of red.

The distribution range of Pelargonium zonale laps right across the Eastern Cape and the Western Cape. Oldenland would have been tripping over this one-metre high shrub all the way on his expedition through Meiringspoort and back, so it’s odd he decided to collect it from that particular spot and carry the slip and seeds back to the Cape.

But he did, and then cultivated it in his Cape Town garden. He might even have tried a bit of hybridising to get the brightest colours. The next time Pelargonium zonale is recorded in botanical history books is in 1710, by which time renowned gardener Mary Somerset, the Duchess of Beaufort, was cultivating it in her greenhouse in Chelsea outside London. She is said to have coaxed several variations from it, crossing it with the red-flowering Pelargonium inquinans from the Eastern Cape.

Did Oldenland sell her the original grandfather pelargonium? Or did he give her a slip or some seeds in one of those time-honoured acts of friendship between plant lovers? 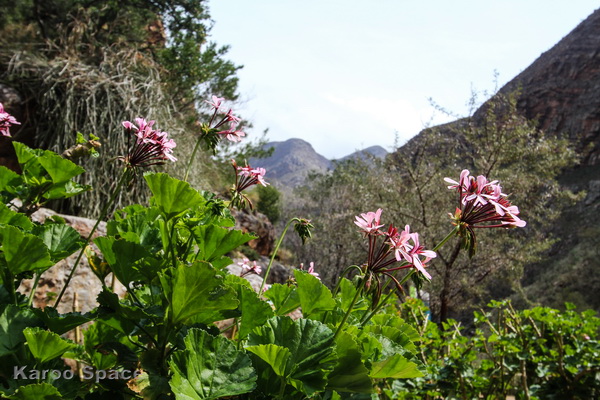 Pelargonium zonale, flowering in Meiringspoort and looking exactly as Oldenland may have found it.

Either way, this willing plant from Meiringspoort went on to launch a million brightly coloured window boxes around the world.

The zonal pelargonium’s virtues as a garden plant are simple. It is easy to grow, flowers frequently with little or no provocation, and not only survives tough conditions but actually seems to prefer them. “You shouldn’t cosset them too much,” advises Freda.

Irregular water, indifferent gardeners and city dust be damned. The pelargonium flourishes regardless. Just one look at its carelessly vigorous growth and jovial bright flowers lifts the spirits.

And it occurs in so many forms. Some species of pelargonium stand upright and leggy as young models. Others sprawl happily along the ground, or trail long stretching arms down the sides of hanging baskets. There are around 250 (original) pelargonium species in the world, but the vast majority of them are found here in Southern Africa.

Having noted Pelargonium zonale and its variations along Freda’s driveway, we wanted to see it in the wild. She’d told us that aside from Meiringspoort, these plants were also prolific in a much smaller poort that runs through their farm. 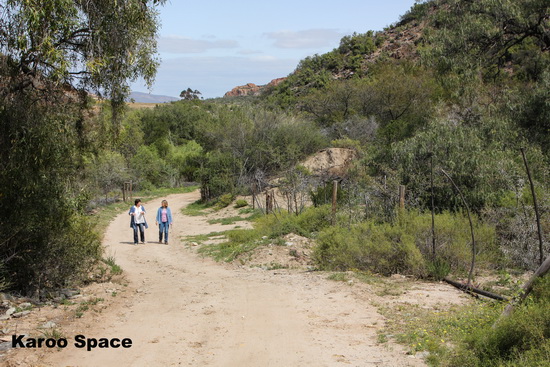 Freda Schoeman and author on the hunt for drought-stricken Pelargonium zonale specimens in a small poort into the Swartberg Mountains.

Slow Walk in the Woods

We headed off to find them, but Freda was shocked when we couldn’t find any. She hadn’t taken this road in a few months.

“I know the drought has been really bad, but I had no idea it would knock them back so badly,” she said, peering anxiously through the open window for any sign of them.

Maybe they would be easier to spot on foot. Freda and I went for a slow walk in the dampest section, near a tiny stream that still trickled, keeping an eye out for those distinctive hoofprint leaves.

Then she spotted them, staging a small revival after the recent rains. There were only a few plants, and one solitary flower, photographed using Chris’s telephoto lens to capture its serene grace along the tree-shadowed banks.

In Meiringspoort itself, the pelargoniums had also been knocked back, it seemed. Here and there we saw a bush, sporting few if any flowers. But next to the famous waterfall in the middle of Meiringspoort, inhabited (they say) by a mysterious mermaid, three bushes grew with characteristic vigour beside the tourism info centre.

We also found it further along the path near the waterfall, its distinctive leaves springing directly from a crack in the rock.

The indomitable grandfather pelargonium was making a comeback. Postcard window boxes around the world, rejoice!