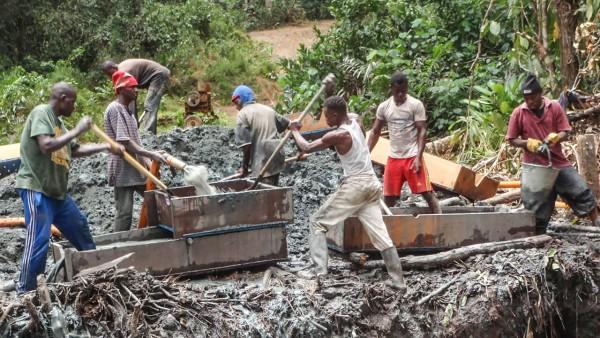 There’s diamond under them thar plants. A geologist has discovered a thorny, palmlike plant in Liberia that seems to grow only on top of kimberlite pipes—columns of volcanic rock hundreds of meters across that extend deep into Earth, left by ancient eruptions that exhumed diamonds from the mantle. If the plant is as choosy as it seems to be, diamond hunters in West Africa will have a simple, powerful way of finding diamond-rich deposits. Prospectors are going to “jump on it like crazy,” says Steven Shirey, a geologist specializing in diamond research at the Carnegie Institution for Science in Washington, D.C.

Miners have long known that particular plants can signal ore-bearing rocks. For example, Lychnis alpina, a small pink-flowering plant in Scandinavia, and Haumaniastrum katangense, a white-flowered shrub in central Africa, are both associated with copper. That’s because the plants are especially tolerant to copper that has eroded into soils from the mother lodes.

But the new plant, identified as Pandanus candelabrum, is the first indicator species for diamond-bearing kimberlite, says Stephen Haggerty, a researcher at Florida International University in Miami and the chief exploration officer of Youssef Diamond Mining Company, which owns mining concessions in Liberia. Haggerty suspects that the plant has adapted to kimberlite soils, which are rich in magnesium, potassium, and phosphorus. “It sounds like a very good fertilizer, which it is,” says Haggerty, who has published the discovery in the June-July issue ofEconomic Geology. 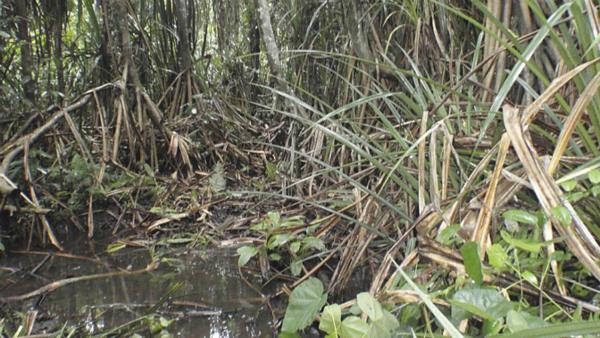 Diamonds are formed hundreds of kilometers below the surface, as carbon is squeezed under intense temperatures and pressures. Kimberlite pipes bring the gems to the surface in eruptions that sometimes rise faster than the speed of sound. The pipes are rare. Haggerty says a rule of sixes applies: Of the more than 6000 known kimberlite pipes in the world, about 600 contain diamonds. Of these, only about 60 are rich enough in quality diamonds to be worth mining. West Africa has many “artisanal” operations in which people sift through river sediments for the occasional diamond eroded from a kimberlite pipe upstream. But few pipes have been found in the thick jungle. “The bush is absolutely impenetrable,” he says.

Haggerty, who has worked in Liberia off and on since the late 1970s, has in recent years focused his prospecting efforts in the northwest part of the country. To look for diagnostic kimberlite minerals, he used corrugated steel rods to dredge up samples from the swampy soil. In 2013, near an area called Camp Alpha, he discovered a new kimberlite pipe 500 meters long and 50 meters wide. The soil above the pipe has already yielded four diamonds, he says: two in the 20-carat range, and two in the 1-carat range.

More importantly, Haggerty noticed a plant that seemed to grow only in the soil above the pipe. It has a stiltlike aerial root system, similar to mangrove trees, and rises to a height of 10 meters or more, spreading spiny, palmlike fronds. He says local people use the fronds for thatching their roofs. Working with botanists from the Royal Botanic Garden, Kew, in the United Kingdom, and the Missouri Botanical Garden in St. Louis, he has tentatively identified the plant as P. candelabrum, a poorly understood species in a family that ranges from Cameroon to Senegal. He says it could be a subspecies or a new species altogether. Haggerty has confirmed the presence of the plant at another kimberlite pipe 50 kilometers to the southeast, but it does not seem to grow elsewhere.

“It’s a brilliant observation, particularly in a heavily forested area that’s difficult to do exploration in,” says Karin Olson Hoal, a diamond geologist at the Colorado School of Mines in Golden. Shirey says the same pandanus species could guide prospectors in Brazil, another heavily forested place at similar latitudes, if it exists there.

Haggerty now has some heavy machinery in place, and early next year, after the rainy season is over, he will evaluate bulk samples of the soil above the Camp Alpha pipe to see if it is worth mining. He wants to continue analyzing the plant and the kimberlite soil to see exactly how nutrients are exchanged. He also wants to see if the plant can be recognized from aerial or satellite imagery. That could help West African nations find and develop diamond deposits, he says.

For those countries, which have suffered through wars and the Ebola epidemics, kimberlite mining could offer revenue without great damage to the environment, Shirey says. Kimberlite mines tend to be narrow and vertical, with much smaller footprints than, say, open-pit copper mines, and their effluent—ground-up kimberlite—is benign. “It’s about as toxic as the fertilizer in your garden,” Shirey says.

As a scientist, Shirey would like to get hold of a diamond sample from the new region. Although many kimberlite eruptions took place relatively recently, the diamonds themselves are ancient: typically about 3 billion years old. Sometimes they trap minerals that offer clues to the temperatures the diamonds experienced deep in the earth. A sample from the new pipe in Liberia, he says, could offer insight into conditions in the mantle about 150 million years ago, when a rift opened up between Africa and South America and created the Atlantic Ocean. “It would probably have some interesting secrets,” he says.